What’s going on with the Aboriginal Flag? 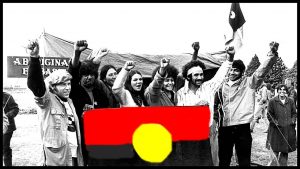 There has been a major blow-up over claims by a private company WAM Clothing that it controls the rights to reproduce the Aboriginal flag on clothing. Cease and desist letters have been sent to AFL, NRL and a number of indigenous not for profit companies who have used the flag regularly for years for promotions focused on indigenous issues.

Politicians and academics are weighing in. Aboriginal opinions are divided – is the Aboriginal flag a community asset, or the property of a proud Aboriginal man who should have all the rights the law confers on property owners to do what they want with their property?

So how can a person or a private company own the rights to a national symbol and everything it represents for Indigenous rights and Indigenous people?

The answer is copyright.

Copyright is an asset recognised by legislation (Copyright Act 1968), which confers on creators of original artistic work, the exclusive right to use and/or commercialise that asset. It is sometimes described as a bundle of rights in certain creative works such as any form of writing, artwork, music, computer programs, sound recordings and films. The rights are granted exclusively to the copyright owner to reproduce the material, and for some material, the right to perform or show the work to the public. Copyright owners can prevent others from reproducing or communicating their work without their permission, or may sell or licence these rights to someone else.

So where does the Aboriginal flag fit in?

The Aboriginal flag, on a simple level, is a graphic design. It’s a logo. It was created by Harold Thomas some time in 1971 with the intention of creating a symbol for a NAIDOC march in Adelaide. At the time Mr Thomas was an artist with a diploma in fine art, part time teacher and an employee of the South Australian Museum. He was assisted by a colleague who took his design and sewed a flag which was carried in the march. The flag found its way to Sydney and was displayed in another protest march and then found its way to Canberra where it was displayed at the Aboriginal Tent Embassy which was established in front of the old Parliament House. Its use as a symbol of Indigenous struggle and unity grew exponentially.

In 1995, without reference to Mr Thomas, the Commonwealth Government proclaimed the Aboriginal Flag to be “a flag under s.5 of the Flags Act 1953 to be the flag of the Aboriginal people of Australia and to be known as the Aboriginal flag with effect from 14 July 1995”. Mr Thomas wasn’t happy about that, so he made an application to the Federal Court to be declared as the copyright owner. He was challenged by two others and he prevailed. If you are interested, you can find the case at Harold Joseph Thomas v David George Brown & James Morrison Vallely Tennant [1997] FCA 215.

Under the Flags Act, anyone can reproduce the Australian flag without having to obtain permission, provided the flag is reproduced in accordance with the published specification. However the artwork that comprises the Australian flag is not owned by an individual. The Aboriginal flag is. To reproduce the artwork that comprises the Aboriginal flag requires Mr Thomas’s permission.

The critics may not like it, but Harold Thomas is the copyright owner of the Aboriginal flag artwork.

Under copyright law, the copyright owner can grant exclusive licences to third parties to commercialise the copyright for specific applications. Thomas has licensed the rights for flags, objects and clothing on confidential commercial terms. Apparently, some royalty-free licences have been granted to not for profit Indigenous organisations.

It’s the licensing for clothing that has caused the ruckus. For the reasons set out below, it’s likely that the license for the objects will too.

What is the ruckus?

The ruckus is that the exclusive licensee of the Aboriginal flag artwork for clothing is a non-Indigenous company called WAM Clothing. A director of WAM Clothing is a person called Ben Wooster who established a company called Birubi Art (now in liquidation) which was sued by the ACCC and fined $2.3 million last week for selling 17,000 fake Aboriginal artworks and items. The products it sold were manufactured in Indonesia and were promoted as being Indigenous Australian art works. Given that the company is in liquidation, the chances of recovering the fine are non-existent. Mr Wooster’s “co-owner” of WAM Clothing is Semele Moore, who according to Linkedin is the “Director and Principal Collection Agent of Moore Debtor Management”.

Not surprisingly, there seems little confidence that WAM Clothing is a “worthy” licensee or custodian of this valuable and important symbol. That is compounded by evidence reported by the Sydney Morning Herald in June that Mr Wooster sold nearly all of the assets of Birubi to a related company, Gifts Mate Pty Ltd. Gifts Mate is still in operation, and many of the products for sale on its website bear the Birubi branding. Gifts Mate is the exclusive licensee of the Aboriginal flag rights for “objects”.

Mr Thomas is quoted as saying “It’s taken many years to find the appropriate Australian company that respects and honours the Aboriginal flag meaning and copyright and that is WAM Clothing.”

Should an artist, a copyright owner of one of the most recognisable logos/images/brands in Australia, be expected to give up his rights for the community, or to have them compulsorily acquired, as some are suggesting, because they are officially recognised as the flag of the Aboriginal people of Australia? What value would you place on those rights?

There is going to be an ongoing discussion about this topic. Understanding the law and considering the issues at stake is an important part of making a useful contribution to the discussion.